REFLECTION ON OUR SHARED PAST

In this episode of Cabin Talk, Ben Harding shares what is known about Lyon and Trinity Church during the Nazi invasion, and seeks input to fill in gaps in our knowledge.

LOOKING BACK ON OUR TIME AT TRINITY

Susie and I came to the Lyon Anglican Church in September 2000 after ten years in the rural, conservative mono-culture of the Scottish Borders. Our children had finished uni, and were about to leave Edinburgh for Nepal and for Australia.

We were a bit apprehensive; coming to a big city, and to a diverse, high turnover congregation with no home of its own. We came initially for five years.

In the event we stayed for thirteen years. [Which may have been too long for some people.] We left Lyon in the summer of 2013. Susie wanted to be back in Edinburgh while her mother was still alive.  And I was old enough to retire and to collect a pension.

During our years in Lyon we much appreciated the friendship and the warmth of the congregation. We were grateful for the support of the hard-working Church Council and the Wardens. I was grateful for the input of the preaching team: Keith Burrell and Tim Evans, Antony Schooling in earlier years, and the late David Paterson.

We were greatly blessed with a string of musical maestri from the time of David Cowen [Susie’s first clarinet teacher] through a host of pianists to Michelle Hong and Simon Freeman and Kae Ting. And, while the church was never rich, we gave thanks for a succession of efficient treasurers: Peter Jeffries, followed by David Kreh, followed by Tom Schuler, followed by Rachel Mougeot. 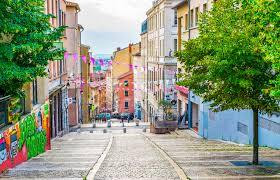 The chapel in rue de Créqui had its moments. Especially  when the leg fell off the priceless grand piano. It was a good place for church lunches.

The chapel of the Communauté de l’Adoration Réparatrice at Gerland [uncovered through Armand Castellon] felt like a big improvement in many ways. The sisters were hugely welcoming; knew many of the children by name, and prayed for us regularly. Soeur Thérèse-Emmanuel, now a centenarian in Paris, still speaks wistfully of those days.

Given the somewhat distant relationship with bishops, I felt much supported by the strong ecumenical links in Lyon. CREL meetings were a regular event, though we may have eaten and drunk as much as we prayed.

Pasteur Jean-Frédéric Patrzynski of the Lutheran Church in rue Fénélon [whom we met on a tram in Grenoble eighteen months ago] and Cardinal Philippe Barbarin were both good friends. As were Pierre Lathulière and Régine Maire. Periodic trips up to Taizé to meet up with Brother Thomas [now sadly died] helped keep me sane.

Church weekends were usually an opportunity to hear something from the wider church world. I still recall Dennis Lennon coming and preaching on the parable of the two houses in Matthew 7. Subsequent visiting speakers included Gordon Ogilvie, Robert Calvert [from Rotterdam], Peter Nielson, David Smith, Richard Mayabi [from Kibera], and John Dinnen.

I miss the fun of the All Age Worship planning meetings; with Elspeth Burrell, Caroline Dick [briefly], Tim Evans, Simon Freeman, Joanne Loizel, and Kae Ting. And I am about to miss walking at Rontalon amid the cherry blossom. With gigôt and gratin dauphinois to follow.